The summer of sport is back, bringing the eyes of the world upon the best the UK has to offer. Consider the variety of athletic events to choose from:

But here's something you may not be aware of: the world takes notice of the best sportsmen the UK have to offer outside of the summer months, too. You can think the rise in interest beyond European borders in the English Premier League (and the rise in licensing fees for overseas broadcasting rights) for that.

And when it comes to players and clubs, there is a sort of symbiosis with contractors and management we've noticed with time. 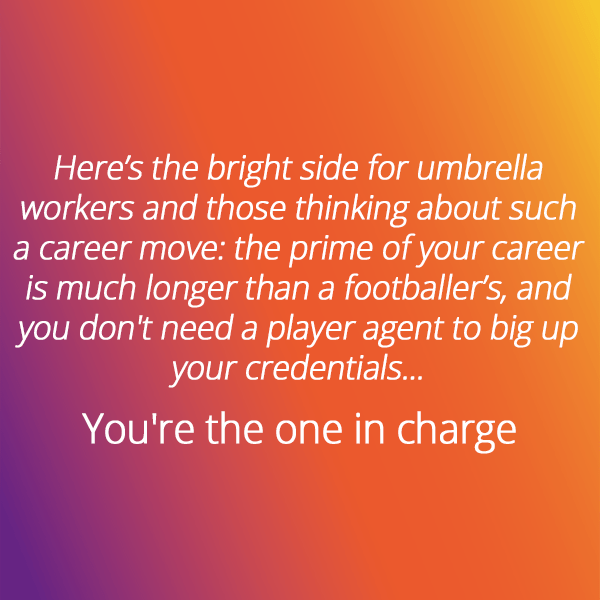 Clubs as Management, Players as Contractors

Like it or not, athletes in a team game are categorised as a resource, i.e. a contractor, by club personnel, i.e. management. This may sound familiar, and it has come about by all kinds of factors: transfer windows, agents, year-round media coverage, betting on player movement, the right to determine the path of your career, not to mention managerial signings predicated on player payroll promises (and sometimes, overpromises).

So long as a smaller club like Leicester City realises that a contractor like Jamie Vardy looks good in some form of red, there will be a restructuring plan in place. That plan won't think of replacing Vardy's production, though: rather, it's trying to work out a starting 11 that replaces the aggregate of all production Rainieri and Co. have lost or replaced in the offseason.

Don’t think this is confined to sport, either. The UK economy relies on umbrella workers, freelancers and contractors like never before:

It’s like a free kick with Gareth Bale's left foot and no wall in front of you. If management is looking for the right pieces amongst freelancers, doesn’t it seem more reasonable than ever to try contracting and umbrella workers?

Loyalty and looking out for one's self

Yes, it is impersonal. Players, clubs and fans figured that out years ago, came to grips with it, and re-channelled their energies to a football that's more world class, year-round and richer in the brilliance of UK multiculturalism than ever before.

With such change, it’s reasonable to expect that some fans and pundits have decried the lost sense of loyalty, mainly to a club. But careers had a more finite ending from the player side, and management had once held the upper-hand, not unlike other labour/management struggles. Not necessarily the good old days. Today, as a contractor, the IT consultant – just like the goalkeeper coming back from an injury – has a self-determinism in their career previously unseen.

There's a luminescent bright side from your perspective: the prime of your career is much longer than a footballer’s, and you don't need a player agent to big up your credentials when you're ready to take charge of your career. If you've played your cards right, you'll already hold the following stickers in your Panini portfolio annual:

And, when you so choose after a free call, you'll also have:

In a way, looking out for yourself and your prospects is its own form of sport, but with a longer career span and a series of ways to fulfil your potential in an economy starving for what you can bring to the table. Good luck getting odds down at the betting parlour on where you’ll end up next, though.

Will IR35 Be Delayed Again?

We discuss the possibility of a further delay to the IR35 reforms to the private sector.
March 8th, 2021

Contents Introduction and Background The IR35 legislation Contractors and Coronavirus Contractors earnings and ways of working Life as a Contractor…
March 15th, 2022

With National Careers Week in full swing, we want to help you decide if working through an umbrella company is right for you.
March 5th, 2021

A message from Doug Crawford, in relation to our support services